Comedy & Carols Night at West Kirby URC
​​Please join us for our Comedy night on Friday 10th December 2021
7pm for a 7:30pm start
£10 per ticket - includes a glass of wine or soft drink
(accompanied 12 - 16 year olds are only £5)
With Tony Vino and Britain Got Talent's Rev Allan Finnegan.
Email Paul Franklin for more information - or call/message 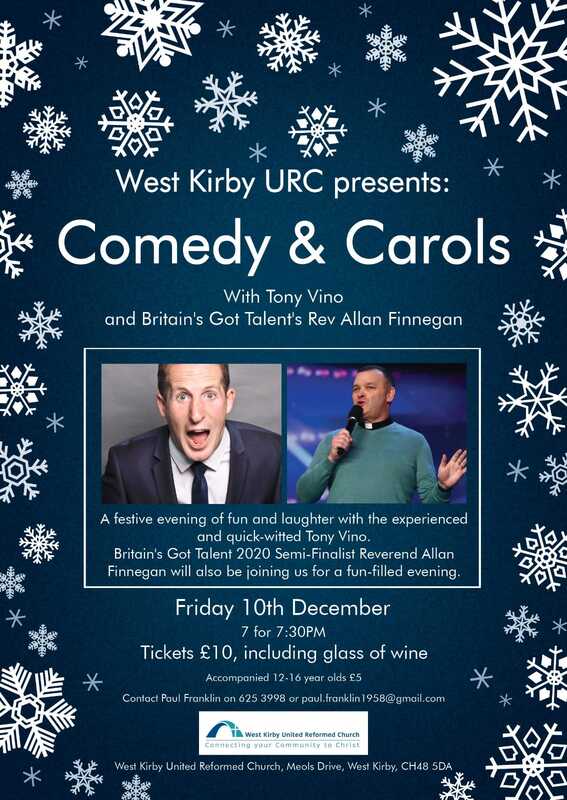 INFO ON OUR COMEDIANS

Preston’s very own funnyman (**** The Scotsman), Tony Vino has been touring the comedy scene since early 2005. Well aware of social and political issues he mixes friendly well thought out observational humour with audience interaction and quick-witted responses. A finalist in 2006 Funny Bones competition, Tony has enjoyed recognition as a comedian and comedy compere of renown. Tony has enjoyed recognition as a comedian and comedy compère of renown, performing for clients such as Asda, Co-Op, RBS, Coutts and KCom. He is a well sought-after act for high profile fundraising events for charities as Christian Aid, Oxfam, Fairtrade Foundation and TearFund plus was also the official warm up comedian for BBC Songs of Praise (tough crowd) and brought out his debut DVD ‘In Vino Veritas’ in 2015. He’s performed in numerous European cities and on cruises in the Mediterranean, the Baltic Sea and the Pacific.

“Tony was delightful, he had 1000 people fully engaged and laughing throughout" Paul Jennings, ASDA Events/Communication

Minister by day, comedian by night. Baptist minister Allan Finnegan found the perfect way to deal with church hecklers by becoming a stand-up comedian and in 2015 won Hot Water Comedy Club Comedian of the Year.

Reverend Allan Finnegan is a pastor at Emmanuel Baptist Church on Merseyside and admits he has occasionally had to deal with the odd heckler interrupting his services. But those hecklers should think again as Allan is now leaving audiences in stitches as a stand-up comedian.